This aerial photo is the very first photo listed in the New Brighton Area Historical Society’s data base of 5000 photos. The original photo was donated by Jim Skiba, and numbered #01.01. A restored photo is on display in the New Brighton History Center’s freight room at Long Lake Regional Park. And it is featured in the inside cover of the book, “A Pictorial History: New Brighton Area, Minnesota, From the 1850s to 2000s,” by Joyce Kloncz.

The photo taken in 1955 is looking west to east and shows many New Brighton landmarks. On the extreme left is the southern edge of Long Lake. This photo was probably taken in the spring with the ice coming out. The old Long Lake beach abuts the lake. Old Highway 100 is shown going west to east, the main arterial highway before Freeway #694 in the 1960s. Long Lake Road is shown in the lower left intersecting Highway 100.

The old downtown area is shown in the middle of the photo with 10th Street as the east-west road and Old Highway 8 as the north-south road. Tenth Street eventually goes east up to Mounds View High School, which had opened in 1954. Lake Valentine is shown south of Mounds View High School. St. John the Baptist Catholic School is shown west of the high school. The Village Hall appears upper center on Old Highway 8. Directly west of the Village Hall is the New Brighton Lumber Company’s long storage sheds. The second New Brighton Elementary School (1939-1978) appears on the southern center of photo. East of the school is the original St. John the Baptist Catholic Church. The St. John’s cemetery loop road is shown lower right.

PDFs of our Photo Collection spreadsheet

The New Brighton Area Historical Society (NBAHS) mourns the loss of Gene Skiba on Friday, June 5, 2009. Gene Skiba was one of the founders of the NBAHS and was the Editor Emeritus of the New Brighton Bulletin.  Gene was born in Mounds View Township August 16, 1923, and was a resident of New Brighton… 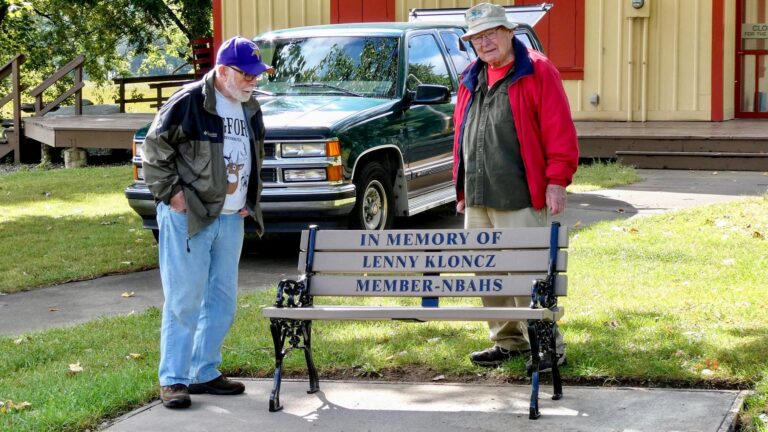 Here is a photo of Wayne Searles and Ron Cota, loyal volunteers of the society, as they are preparing to install the park bench in honor of volunteer Lenny Kloncz. Wayne and Ron are responsible for much of the maintenance of our depot museum, and we thank them for their service.